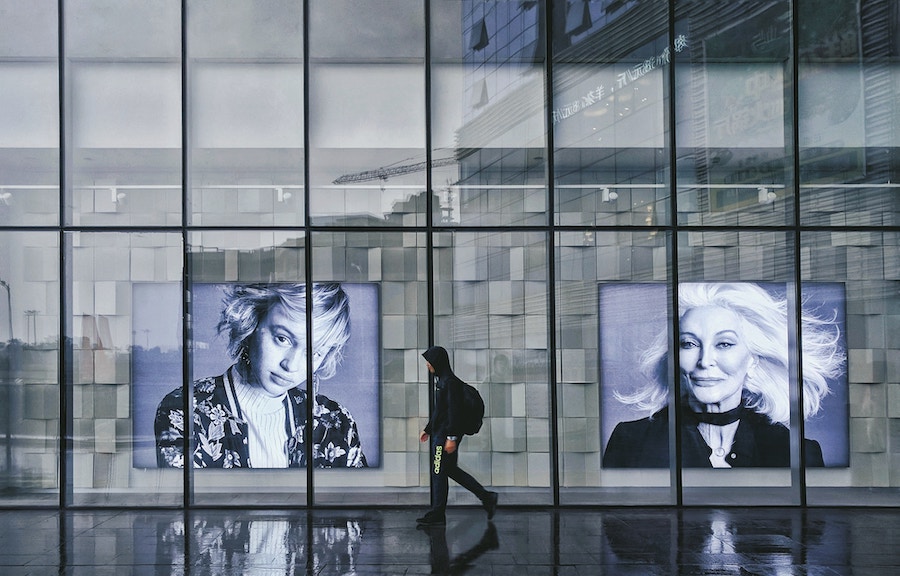 There’s big news for followers of shocking weight loss tips, down-and-out child stars, and pictures of weird things that may or may not be body parts. You know what I’m talking about — all the strange links and photos that show up at the bottom of web-published articles, just daring you to click on them.

Yes, the ubiquitous native advertising companies Outbrain and Taboola are joining forces in order to better compete with Google and Facebook. Obviously, this will have big implications for native advertising, and it raises the question — just what is that one vegetable gut doctors are begging people not to eat? More importantly, could this merger create new opportunities for B2B native advertising?

Do you want to find out more information on native marketing and best practices in B2B social media marketing? Sign-up to watch our webinars today!

Why the Outbrain Taboola Merger is Significant for B2B

Backing up for a moment, let’s consider what is actually taking place in the Outbrain/Taboola merger. The new company will be retaining Taboola’s name and CEO, and will be serving an audience of 2.6 billion across more than twenty thousand online properties. By merging, Outbrain and Taboola can extend their advertising reach even further — and expand into artificial intelligence, video advertising, and other new ecommerce frontiers. 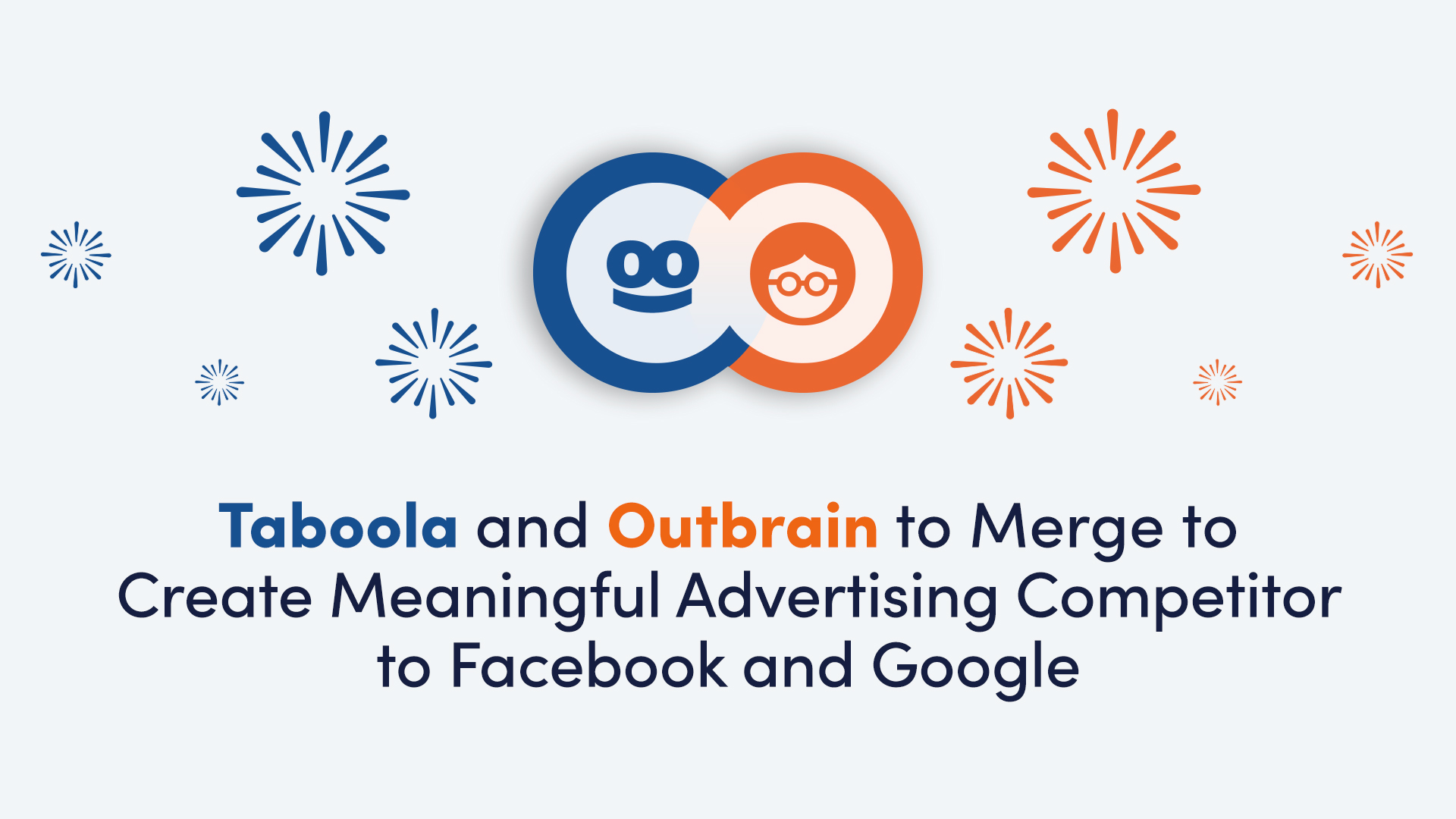 That these companies are merging makes logical sense, and shouldn’t come as much surprise to seasoned industry watchers. They’ve behaved more like friendly competitors than bitter rivals over the years, despite sharing extremely similar business models. Each is based on serving up algorithm-generated content recommendations, which displays text and image ads chosen to match the interests of the individual consumer viewing them.

The Content Recommendation that Outbrain and Taboola provides is itself a form of native advertising — serving up paid ads, which direct to content not products, alongside links to the host site’s organic content. Originally, it was very difficult to discern between native ads and actual content suggestions. After some pressure on publishers and ad networks, they began adding “recommended” or “around the web” headers.

When it comes to B2B advertising, content recommendation ads usually tend to cast a wider net than would be advisable for B2B companies trying to reach hyper specific audience segments or is it.

Consider your classic ABM campaign. Account based marketing is all about creating a hyper targeted audience and then engaging that audience across various and diverse channels. The more touch points the better. In fact, an ABM campaign is basically a multi-channel nurture campaign and, here, native advertising can be very impactful. However, If you don’t do ABM campaigns as much, that doesn’t mean native is irrelevant for you.

What is Native Advertising?

What Outbrain and Taboola do might be best understood as a hybrid or link between display advertising and native advertising. Display advertisements are banners, pop-ups, and interstitial ads that boldly assert themselves into users’ web browsing experiences.

On the other hand, native advertising describes a less obtrusive, more organic style of advertising content that fits in context with the website where it appears.

Display advertising gets a bad rap sometimes, and not without cause. It can be obnoxious and disruptive, and consumers don’t like it very much. Ad blockers are becoming increasingly popular. The demand for ad blockers means they keep evolving to account for all the new tricks display advertisers come up with to get in front of web users’ eyeballs.

B2B clients aren’t looking to make impulse purchases, so display advertising is generally regarded as a suboptimal way to reach them, usually used for remarketing audiences. Some approaches contained within native advertising, however, are much better suited to B2B advertising.

In addition to the content recommendations provided under the Outbrain/Taboola model, there are two other primary types of native advertising:

Here are 5 best practices to keep in mind when creating and running a B2B native advertising campaign.

As with any b2b marketing campaign, targeting is crucial. Building an effective audience of ad targeting is a process of trial and error. Patience is necessary as is an analytical mindset. Don’t go into a campaign expecting to see ROI immediately. Instead, come with a hypothesis and try to see if you can prove or disprove it while you ad budget grows incrementally.

Make sure the content you’re creating fits with the tone, style, and editorial “voice” of the publication it will appear in. When it goes live, make sure to share it on your own marketing channels and social media accounts.

Another thing to keep in mind is that native advertising isn’t ephemeral the way display ads are. The ads will generally persist for as long as the host site is active. The content could also show up on Google search results and pick up the odd backlink here and there.

For that reason, it pays to make your native ads work as long-term standalone content. Substantive, in-depth content can be a great fit for B2B campaigns, given the cost and complexity of many B2B products. Don’t create disposable-looking content. Use high quality photos, copy edit the writing carefully, and avoid meme-of-the-week references that will soon look dated.

You’ll also want to keep tracking user behavior and conversion associated with the native ad content, even after the marketing campaign that spawned it has completed, if you want to get the true picture of its effectiveness.

Finally, don’t be coy about the fact that your native advertising is, in fact, advertising. Most web users don’t mind being marketed to now and then, but they hate feeling like a company is trying to trick them. In fact, studies show that consumers are more likely to respond positively to a native ad when they know it’s an ad, so don’t be afraid to own the fact that you’re putting up sponsored content.

If you’re going to run a B2B native advertising campaign, you might as well learn from the best. Here are four examples of it done right.

Audience: Executives in the athletics industry 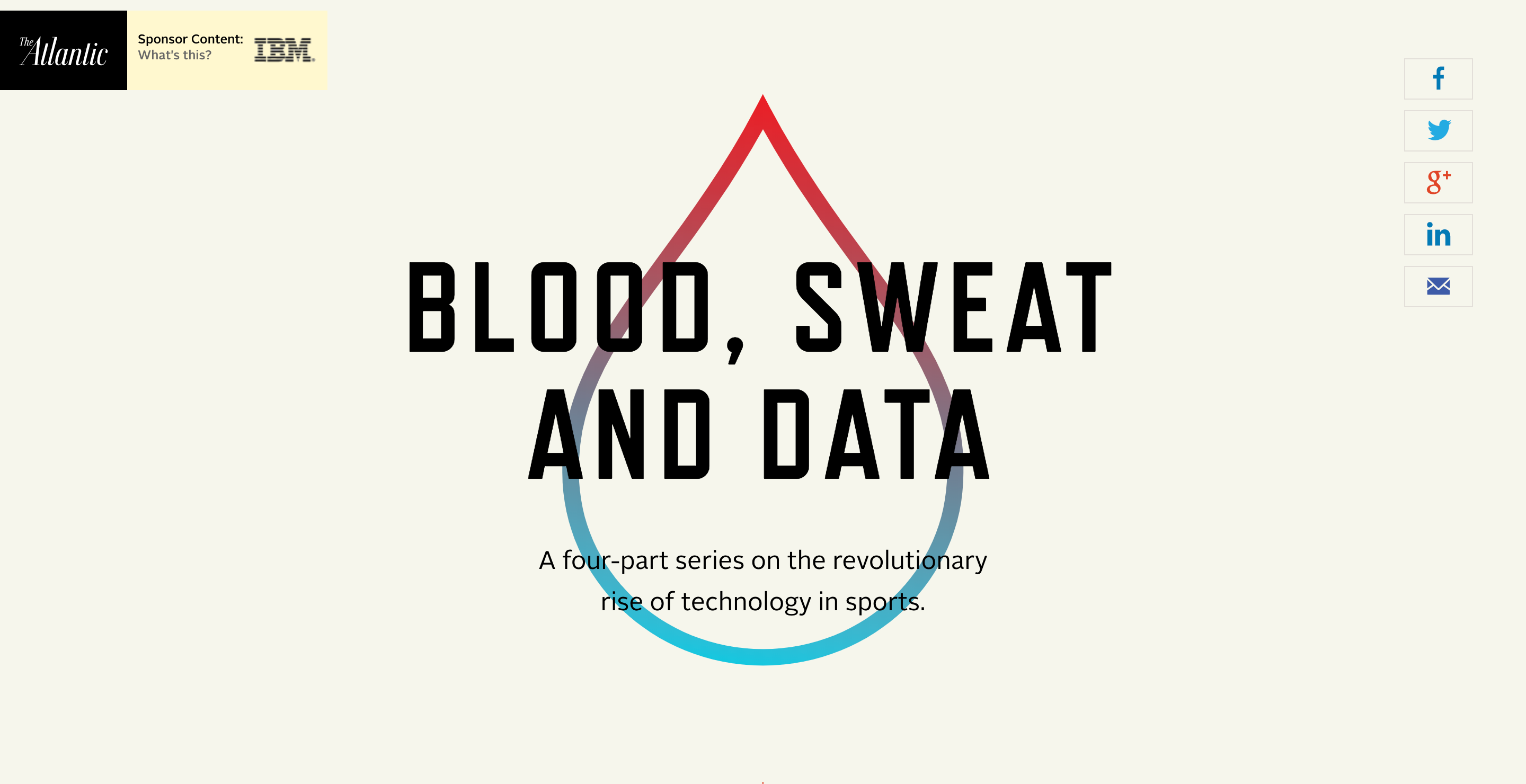 It makes sense that IBM would go with The Atlantic for its native advertising campaign. They’re both venerable institutions with a long and respected history, and The Atlantic has a strong online presence.

Their articles focus on particular topics of interest. Recent series include multi-part stories on the use of data analytics in professional sports and nutrition. These ads fit in perfectly with the overall tone and content of The Atlantic, and make for a reading experience that doesn’t stand out as ad-like at all. 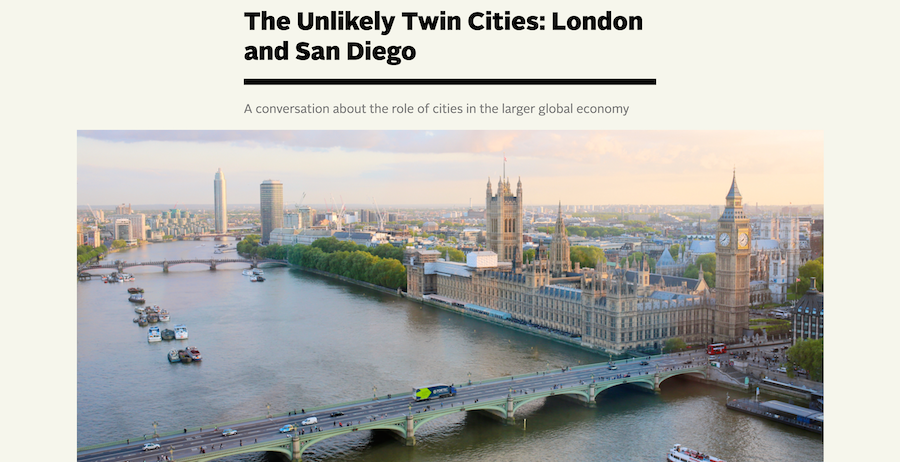 JPMorgan Chase zeroed in on a politically aware, globally-minded audience by placing their content in the online magazine Politico.

They went for an informative, indirect approach that foregrounds an interesting-in-its-own-right story. The Subway That Connects Two Continents is a well-written piece about the city of San Diego’s role in the tech industry and global trade. JPMorgan Chase’s Global Cities Initiative ends up becoming a big part of the story — but by focusing on the beneficiaries of the initiative’s work, the piece reads more like journalism than marketing hype. 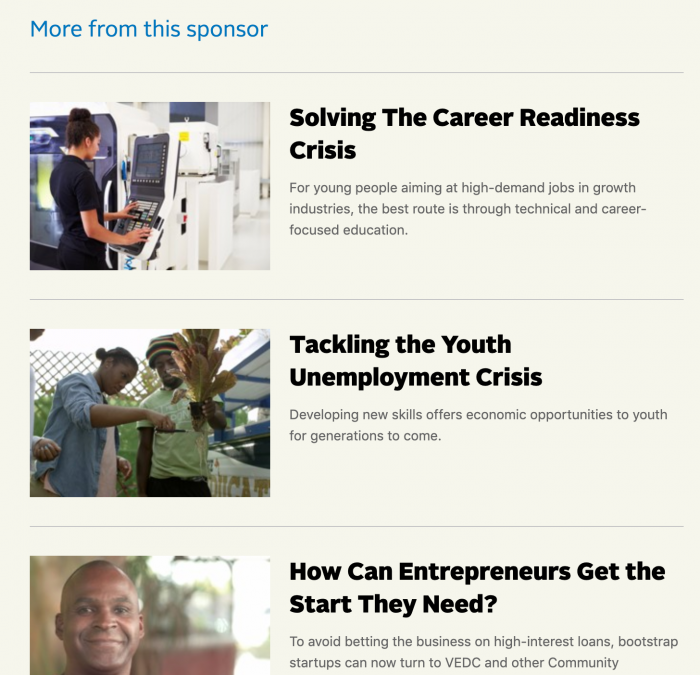 The native ads used by The Atlantic to promote sponsored content:

Audience: Leaders in eCommerce and Retail

Forbes is a popular host site for native advertising. SAP has taken full advantage of the platform they offer, essentially creating an entire content subsite with daily postings.

Alongside tailgating tips and global news stories, you might find posts about SAP’s subsidiary companies and the amazing things their software solutions can help businesses with. SAP is playing the long game here. While their sponsored content is clearly labeled as such, they fit right in with Forbes’ regular writers. 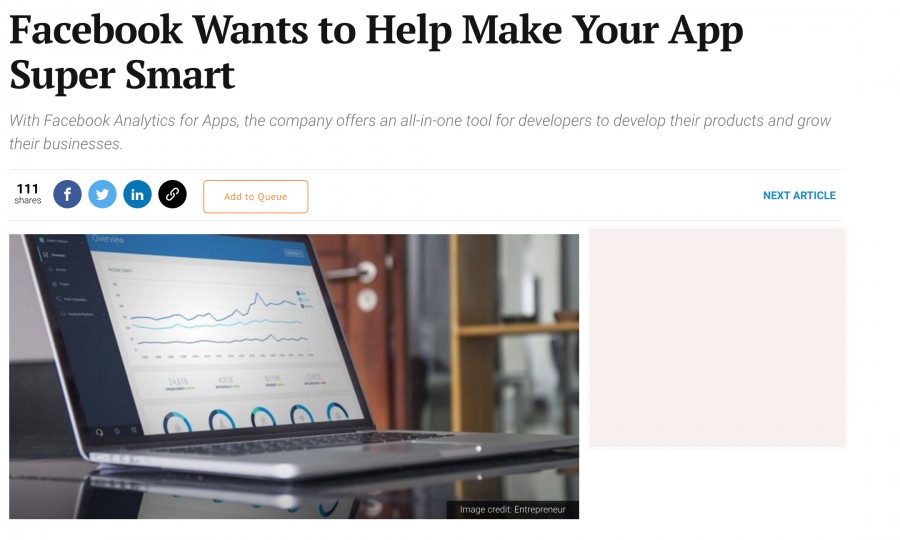 Here, Facebook goes for a target market of up-and-coming developers and startups. They make the case for their Facebook Analytics for Apps service with an engaging, readable, and highly informative article on Entrepreneur magazine’s website.

It’s got a clean, uncluttered layout and relevant graphics that load quickly. This is a plus for B2B buyers who don’t have the time to wait for long page loads, or mentally decode an overly-busy design format.

I know what you’re thinking – these are branded content campaigns. These are not native ads so how does it relate to this article?!

B2B customers aren’t garden-variety ecommerce shoppers. You can’t hope that the .0001% of viewers who click on banner ads will happen to be B2B decision makers in your industry. You have to reach them with targeted campaigns that find them where they are. You need to get through to them with information that will help them make the right choices to solve their mission-critical problems.

The existing weird-image-and-provocative-headline model of content recommendation advertising isn’t currently a great fit for B2B. But with the Outbrain/Taboola merger expanding the possibilities in this sector, it’s definitely something to keep an eye on. The more the new company is able to broaden its reach and refine its targeting capabilities, the more B2B advertisers will have to work with.

B2B buyers do their homework. Most of them will have spent considerable time researching a purchase before they ever contact your company. To get ahead of the competition, make sure that their research is likely to include informative, interesting, relevant content that uses facts, data, and engaging visuals to make the argument for your brand.